skip to main | skip to sidebar

I've decided to move on over to WordPress for my blogging. The main reason is easy equation editing, though there are some other functionality issues as well. I've ported all the material from this blog over there. The new site is:

and the new title is "SuperFly Physics". Hope to see you there. -Andy
Posted by Andy Rundquist at 7:57 AM 1 comment:

Email ThisBlogThis!Share to TwitterShare to FacebookShare to Pinterest
Labels: blogging

Last year I tackled a common problem in our Modern Physics lab: too many students, not enough copies of the equipment for them all to do the famous labs of the early 20th century. My solution was to have them all get a little time on the lab/equipment but not let anyone do the whole lab outright.

Here's how it worked. In the first week they break into four groups, one for each experiment (Franck-Hertz, Millikan Oil Drop, e/m measurement, angular momentum study (the TeachSpin one with the magnet in the cue ball)). In that week they were tasked with writing the theory and set-up/procedure section of the eventual write up. That's it. They were given manuals for all the equipment and, of course, they had their text books from class to help with the theory section.

In the third week they analyze data. For a different experiment. From a different lab group.

Then the Frankenstein lab reports are mashed together and turned in. It worked pretty well last year and I'm between weeks 1 and 2 this year.

At first I told them that the last group would get the full grade for that lab report. That didn't go over very well. We ended up deciding that I would grade each group and their contributions, trying to be careful not to penalize a group for some other group's poor work.

Spreading it over several weeks was done because some of this equipment is finicky and the analysis can be tricky. Typically I don't like students to have to do too much outside of our three hours per week together so the three weeks is about the right amount of time is you consider all the analysis and all the writing being done in class. What was cool, though, about the three week spread was how the groups pushed each other. If a group knew that it was going to have to take Millikan data, they would pressure the set-up group to make sure to give them all the details they would need. Last year Millikan gave us some fits and it was cool how the data collection group worked with the setup group to figure out the glitches.

I see a lot of value to the way this is set up. In three weeks they get exposed to different aspects of three different labs. They understand the value of a carefully written setup section and the value of carefully organized data. I do it because I don't have enough equipment to do it other ways but I have to say I like this solution.
Posted by Andy Rundquist at 10:20 PM 4 comments:

Announcement: Next week John Burk (@occam98) will show us how he uses Tracker in his teaching. Wednesday 3/30/2011

Tonight was the second installment of the physics educators elluminate chat. This time we had 15 different people log in and join us. Here's the recording of the bulk of the session.

Tonight we tried having a mini-presentation at the beginning (me talking about "momentum is king") and then we chatted for about 20 minutes about issues around teaching momentum, force, and energy.  The one sentence version of my take is that momentum is king, force keeps track of momentum swaps, and energy is a handy way of figuring out how much momentum an interaction can swap in total. We then group edited a google doc with our names and interests  to try to facilitate the community building that we're clearly all craving (why else would we be online late on a Wednesday night when, say, some of us are on spring break enjoying a fun stay at a hotel with 5 pools, ping pong, a basketball court, and where kids eat free!). Then we broke into a spontaneous discussion of Standards Based Grading (since, as one participant emailed me later, there were some serious heavy hitters in that department present).

Please think about joining in next week. We'll stick with the same time (9:30pm EDT/8:30pm CDT) on Wednesday. We don't have a theme for next week yet but I hope one will grow organically in the next few days (along with a possible presenter if that fits).

Here are the useful links again:

What's in a name?
I've coined this phrase "Global Physics Department Meeting" and I'm not sure if it has legs. I guess I'm trying to capture the spirit of the meetings as people are enjoying sharing with each other.
Posted by Andy Rundquist at 11:10 PM 6 comments:

If it spins, it doesn't flop 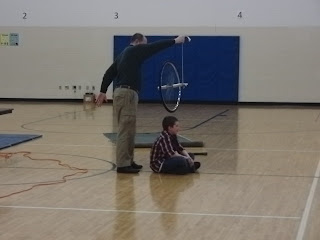 Me: "IF IT SPINS . . ." Audience: "IT DOESN'T FLOP!" This is a shot from my Piper Physics Patrol showing the concept of angular momentum. I hold the wheel right over the student's head and let go with my left hand (the one without the rope). It doesn't flop and so doesn't hit his head. Fun times.

Posted by Andy Rundquist at 2:21 PM No comments:

Tonight my twitter physics buds and I tried an Elluminate chat. Here's the recording of some of it. It was a lot of fun as we talked about standards in physics courses, a database of (re)assessments, Momentum as King, and more.

We thought we'd try to make it a weekly thing so here's the details:
Wednesdays
8:30PM central time
http://tinyurl.com/RundquistOfficeHours that's the link you use to get into the elluminate session

We thought we'd use Elluminate instead of a twitter chat because you gain a lot more functionality. Tonight we had eight participants but the system can handle up to 100 (I think) so please think about joining us.

We talked about leveraging some of the functionality and asking people to occasionally give a mini-presentation to set some context. Next week we'll start that off with a presentation from me on my thoughts on Momentum as King. This will involve talking about both force and energy as accounting tricks, lots of fun.

As just a teaser for how cool these chats can be, at one point tonight I made an offhand remark about how we could all share the first three things we teach in an intro physics course. Wow, with just eight people I think we got ten opinions! It lead to some great conversation.

Thanks to all who joined me tonight. Please comment below about your impressions of tonight when you get a chance.
Posted by Andy Rundquist at 11:03 PM 5 comments:

Today was the last of four consecutive class periods dedicated to oral assessments in my Theoretical Mechanics course. I've written about these assessments before. After that last post some of my tweeps said they'd love to see some of the assessments in action. I asked the students if it would be ok if I video taped (that's such an anachronistic phrase, what's the modern version?) the class and they gave me the thumbs up. Below are a couple videos from today.

In both I start the clip after the student has finished working the problem. This is when the whole class has a conversation about how to assess the work.

In the one above the student was asked to show the steps necessary to determine the motion of a double pendulum when the first rod is replaced by a spring. He got a little hung up on the potential energy but eventually got it all down. The students and I decided it was a 3 (meets expectations) but it was interesting to hear the debate about whether it was a 4 (exceeds expectations). That's when I introduced the concept that I brag to my colleagues about any 4's that ever happen. I say pretty bluntly that I wouldn't brag about that performance.

In this one the student had to solve the following problem:

Here it's neat to hear the students making the case that this is a 4. And, true to my word, I bragged about this one to my colleagues later in the day.

I really like how open the class is about these assessments. They're honest with each other and they're very thoughtful about their comments. This class has sure been a lot of fun so far.
Posted by Andy Rundquist at 9:16 PM 4 comments:

First, sorry if you came here under false pretenses. This is about doing multiple drafts of a grading run, not grading drafts of student papers. Stick around, though! Shoot, lost 'em. Oh well, here are my thoughts about this anyways.

I like to grade on the bus when I have time where I can't do much else. I don't have internet on the bus and I don't own a smart phone. When I started grading papers with my voice I thought I'd have to give up the bus part but I found the bus time could still be useful if I printed out the paper to read on the bus and then screencast my comments later.

Today on the bus I realized that I really like this new set up. Have you ever marked up a paper, putting tons of effort into a comment on a particular page and then later realized that they fixed the problem on a later page? I used to hate that because I'd have to back to the earlier comment and cross it out or add "nevermind" or something. With this new system of mine they never see the paper copy so I can mark it up any way I like. I don't have to worry about mistakes I make because the student will never see them.

All I have to do is make sure there's enough there for me to know what I was thinking when I get around to screencasting my comments to the student. This is usually the next day but sometimes a few days go by before I remember to do it. When I see a crossed out comment or "nevermind" I know to just skip that, or, possibly, comment to the student that the order of the paper was a little different than I thought it should have been.

The other thing I like about my bus system is that I go through the whole stack of papers before doing my final "draft" of grading with the screencasts. This helps me normalize my grading.

It's funny how I encourage my students all the time to use a drafting process on things and now I'm seeing a similar benefit in my own grading. I'd love to hear how others have benefited. Use the comments or let me know on Twitter @arundquist
Posted by Andy Rundquist at 7:43 PM 3 comments:

Andy Rundquist
I'm a husband and father of three boys who also teaches physics at Hamline University. My personal motto is "higher, faster, louder" and it does me well most of the time. Most of my friends call me Superfly.